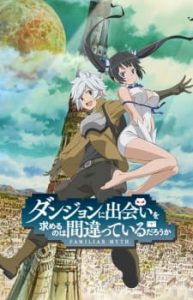 Watch  DanMachi Season 1 anime full episodes in english subtitle online. You can watch Dungeon ni Deai wo Motomeru no wa Machigatteiru Darou ka Season 1 in english subtitle online. Watch Is It Wrong to Try to Pick Up Girls in a Dungeon? full episodes english online. DanMachi Season 1 anime always updated at AnimeXin.info. so, Please don’t forget to click on the like and share button. As a result, you can watch other popular and latest anime updates. You can find anime updates in Animexin Facebook page and other social medias.

Life in the bustling city of Orario is never dull, especially for Bell Cranel, a naïve young man who hopes to become the greatest adventurer in the land. After a chance encounter with the lonely goddess, Hestia, his dreams become a little closer to reality. With her support, Bell embarks on a fantastic quest as he ventures deep within the city’s monster-filled catacombs, known only as the “Dungeon.” Death lurks around every corner in the cavernous depths of this terrifying labyrinth, and a mysterious power moves amidst the shadows.

Even on the surface, survival is a hard-earned privilege. Indeed, nothing is ever certain in a world where gods and humans live and work together, especially when they often struggle to get along. One thing is for sure, though: a myriad of blunders, triumphs and friendships awaits the dauntlessly optimistic protagonist of this herculean tale.