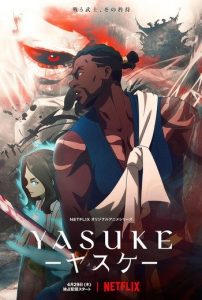 Yasuke anime episodes in english. Yasuke in english subtitle at AnimeXin.info. so, Please don’t forget to click on the like and share button. As a result, you can watch other popular and latest anime updates. You can find anime updates at Animexin facebook page and other social media websites.

In a war-torn feudal Japan filled with mechs and magic, the greatest ronin never known, Yasuke, struggles to maintain a peaceful existence after a past life of violence. But when a local village becomes the center of social upheaval between warring daimyo, he must take up his sword and transport a mysterious child who is the target of dark forces and bloodthirsty warlords.The first African samurai who actually served the legendary Oda Nobunaga, will be released to the world.