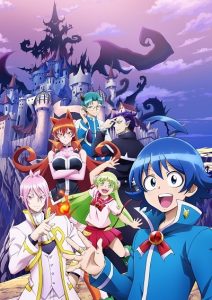 Your rating: 0
7 1 vote
Welcome to Demon School! Iruma-kun [All Seasons]

A boy’s chaotic life in a “prestigious” boarding school for elite demons!

Iruma Suzuki, human, 14, one day finds himself sold to the devil. To add to his predicament, his doting owner and self-appointed “Grandpa” is the principal at his new school. Now Iruma must deal with a haughty student who challenges him to a duel, a girl with adjustment issues, and so many more scary beings! Can this ultimate pacifist dodge the slings and arrows that are flung his way? As he struggles frantically, Iruma’s innate kindness begins to win over enemies.