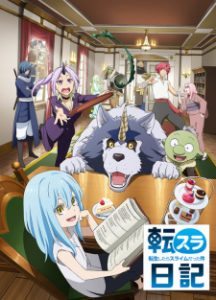 The Slime Diaries [All Seasons]: Season 1

Your rating: 0
5 1 vote
The Slime Diaries [All Seasons]

“Dear diary… I got reincarnated as a slime.”

Even in another world, lives aren’t always on the line. There’s plenty of work to be done, from feeding the community and forging the items the community needs; as well as plenty of play …and hijinks throughout! Join Rimuru and friends as they kick back and enjoy their daily lives.