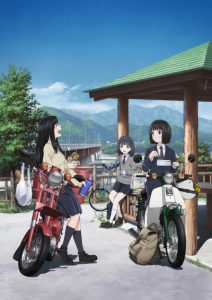 There’s freedom in loneliness, and Koguma finds hers on a motorcycle. A Honda Super Cub motorcycle, to be exact. With no parents, friends, or plans for the future, Koguma’s daily detours on her way to school become her sole source of excitement. Until one day, she learns a classmate, Reiko, shares her passion. Together, they’ll discover friendship, fun, and the adventure of the open road.