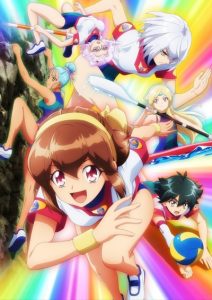 Aspiring athletes from around the galaxy gather to compete in a tournament where the winner will be crowned the Cosmic Beauty. What begins as rivalry grows into friendship among the athletes, including a lunar refugee and her kangaroo companion, the daughter of an arms-dealing CEO, a mysterious loner, and Earth’s representative…a humble potato farmer named Kanata Akehoshi.