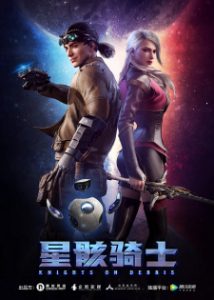 Knights on Debris [All Seasons]: Season 1

Your rating: 0
4 1 vote
Knights on Debris [All Seasons]

In the future, human exploration of the universe has entered a prosperous era. Engineer Chen Mo initially thought he would make it to a new world developed by humanity-Nohara Star in an interstellar spacecraft. Unexpectedly, when he wakes up, Ye Yuan Xing becomes part of a shattered earth, and his teammates become a monstrous monster. Chen Mo had no idea that for several hundred years sleeping in an inactive cabin, humans had formed an interstellar federation, and the wild planet had turned into charcoal. Why am I still alive? ——With countless questions, Chen Mo improved his four robotic assistants with different personalities and functions. With their help, they fight monsters to survive every day, stockpile supplies, and prepare to return to earth. However, an alien woman who falls from the sky completely interferes with her plans to return. Thorne’s beautiful noblewoman Clayty brings poor Chen Mo into bigger trouble.